What is an EXIR Camera?

What is an EXIR Camera?

What is the benefit of using the Hikvision DS-2CD2342WD-I turret camera over a dome camera like the DS-2CD2142FWD-I which has the same specs but is vandal resistant?

Is it just for aesthetic reasons?

We get asked this question and variants thereof quite frequently. Traditionally, CCTV has been all about dome and bullet cameras, and turret / eyeball / flat-faced dome cameras haven’t been quite as commonly installed. Now however we tend to recommend Hikvision’s DS-2CD2342WD-I EXIR turret camera for most applications that don’t require a vandal resistant dome, such as when the camera is going be mounted out of reach.

This is due to the fact that the turret camera is what is named by Hikvision as an EXIR camera, which is to say that the camera’s built-in IR LEDs are housed in a separate window to the camera lens and are rectangular-shaped, utilising Hikvision’s patented EXIR technology (hence the name!).

The camera lens is in the left-hand window in the below image, and the EXIR LEDs are in the right window. 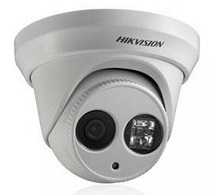 This helps to eliminate a number of inherent problems with more traditional integrated IR seen in many cameras.